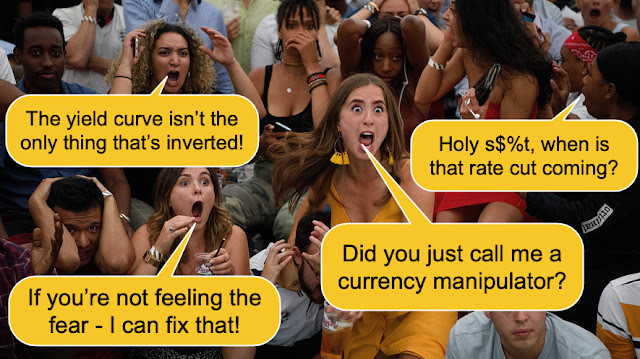 Thoughts:
I’d be willing to bet that not a single person who has ever written an article on the yield curve – has ever traded it. Common sense suggests that bull markets can’t last forever; however, economists think that if you consistently scream recession – eventually you’ll be right and that will excuse underperformance.  After all, as long as you’re not as bad as the other guy – you’re good right?  When you work for a big company, it’s difficult to be rewarded for taking risks or thinking differently.  In most banks and brokerages, you need to be average and persevere to succeed.  In big business, having a battle scar is often a career ending event – in small business it’s a sign of courage and honor.
To that end, successful entrepreneurs create good, long-term habits.  These habits become the foundation of who they will become.  For example: having a goal of running a marathon in six weeks is bold, but it’s not a habit.  You may succeed, but it’s more likely you’ll simply abandon the project. On the other hand, the goal of running to the mailbox (at least) and back for 50 days in a row – is the sort of habit that might stick.  The same goes for education.  Doing ‘flashcards’ every day is different than cramming for an exam.  Those same thoughts are amplified within an entrepreneurial lifestyle.  If you can replace a bad habit with a good one, you’ll live with those benefits for decades.  The challenge is to set up systems that create habits – not sprints that lead to failures.
Last week I returned to something that was written in 2013 by Paul Graham - co-founder of Y-Combinator and investor in many of today’s most successful startups.  If you’re unfamiliar with Y-Combinator - here is a list of the top 100 Y-C companies  (by market cap) of all time.  His post was titled: Do Things That Don’t Scale– published in July 2013. A couple excerpts from the piece are as follows:  “One of the most common types of advice we give at Y-Combinator is to: Do Things that Don’t Scale.  A lot of would-be founders believe that startups either take off or don’t.  You build something, make it available, and if you’ve made a better mousetrap, people will beat a path to your door as promised.  Or they won’t, in which case the market must not exist.  Actuallystartups take off because the founders make them take off.”  Here are 7 more traits of founders of successful entrepreneurial companies:
1.    They are constantly recruitingusers manually.  They’re not running FB ads or analyzing marketing budgets.  They’re demoing to small groups of people, soliciting feedback, and onboarding users one at a time.
2.    Most startup founders are fragile,and that’s one of the elements inexperienced investors get wrong.  Today’s people often judge success by the amount of invested capital and/or by the thickness of the marketing plan – rather than by timetables and accountability.
3.    Even more important than recruiting initial users – is turning those initial users into disciples and evangelists. Early users should feel that signing up with you was the best choice they ever made, and you (in turn) should be racking your brain thinking of new ways todelightthem.
4.    I can’t understate how extreme a young company’s attention to their initial users’ needs to be.  Steve Jobs used the phrase: ‘insanely great’ when he referred to keeping that initial excitement alive.
5.    Quickly figure out what specific ‘market niche you can own’.  Become profitable in that niche, and expand outward. Facebook started with Harvard students and expanded to other universities – long before it ever was introduced to J.Q. Public.
6.    When you have a small number of users, you can get away with doing things ‘manually’ that you plan on automating later. This lets you launch and change faster. And when you do finally automate yourself out of the loop, you’ll know exactly what to build because you’ll have muscle memory from doing it yourself.
7.    What doesn’t work: the Big Bang Theory.  No, the TV show works just fine – it’s when you apply the principles of big name branding with large marketing budgets to young entrepreneurial ventures that doesn’t work.  How many successful startup launches do you remember?  The goal of an initial launch is to obtain a small core of users.  Your success will depend upon how happy you made those core users – more so than on how many users you sign up.
Posted by R.F. Culbertson at 10:40 AM No comments: